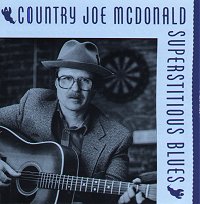 Standing at the Crossroads

"Standing at the Crossroads is an old song -- ten years old. It's a white country blues, a feeling-sorry-for-yourself kind of song, the typical song I write about the blues hounding me wherever I go. But it's done in a melodic way so you don't get depressed about it."

"Eunicita is even older, from 1972, a very self-reflective period. It's very poetic and may be hard for some people to understand. It's a classic psychedelic music piece; the style goes back to the first Country Joe and the Fish album. It was more about me when I wrote it but now I think it's about my generation, standing exposed and all our mistakes and wondering who cares. I can't help but think of Vietnam veterans now when I play it: standing before the world with tears running down their faces in front of cameras over and over again. It's a kind of watershed song, and it stands up now, I think."

The picture frame spins round and round my face
I've lost the place I used to go all by myself
He stands alone, the rocks and trees have all blown away
the sands burn his feet

There are precious stones, things which a man could use
to make his fortune
But he does not see, for his mind is now
in other places

"Superstitious Blues is tongue-in-cheek but not completely ironic, about the fragility of our lives today and how we govern them -- by the stars, by our therapists, our genes -- what's pulling the strings here? It's a blues but it has a fun sound to it."

"Tranquility was written around the death of my parents. It's in the spirit of Erik Satie -- classical -- but it's using folk instruments like the harmonica and guitar the way I used them in the '60s. I wrote the piece in the middle of grieving a lot. I'd always admired religious music written for terrible times, the idea of finding solace in music and poetry, and this music did it for me. I played it for my dad in his last few days, and for myself. It's slow, it's peaceful."

"Starship Ride is very Bay Area psychedelic rock and roll, and it's fun; it's about romance, a date, the future -- a science fiction love song. It's a double entendre, a titillating song but it still has some Mom and Pop in there. It was a perfect vehicle for Jerry Garcia because it sounds so much like a Grateful > Dead song, and the Grateful Dead don't do those songs anymore. It's the kind of song I like to write -- a one-chord, one-rhythm, straight ahead rock and roll pop song with a little twist of the futuristic."

Oh, get your self together
Oh, leave your troubles behind
Oh, don't worry 'bout the weather
We'll be going on a starship ride.

Oh, the moon is callin'
Come pack your troubles away
Out where the stars are fallin'
We'll be cruisin' the milky way

Hey, tell your mama and your papa
Don't wait up tonight
We'll bring back a little piece of heaven
When we get back from our starship ride

"Cocaine (Rock) is several years old and written out of personal experience. It's very commercially rock and roll; it just turned out that way. With the cello in there, it's a beautiful piece of music, and the lyric is there if people want to listen to it. It's not a hard sell. It says something about a very important drug issue and it comes from the heart. I've never liked cocaine, but I don't equate hard and soft drugs. I think recreational drugs -- pot, beer, wine and coffee  are here for us because we need a little something to help us through the day, but hard drugs and alcohol are something else.

"Right now, people who have no experience taking drugs are dictating our drug habits, so it's really up to people like myself, who've had experience with drugs, to let people know what it's about. I'm not grandstanding here or making a big speech about my drug life, I'm making a simple statement which is you can get in over your head and it's simple to stop just by saying no. I never thought Nancy Reagan and I would be saying the same thing, but I think we're looking for common denominators here."

"Blues for Breakfast is, once again, letting everyone know that I wake up in the morning feeling bad sometimes. That's an old blues form, and in it I'm sort of doing a joke on a joke on a joke. It's a blues sound from the Mississippi Delta, but with a modern little twist."

"Clara Barton is one of my women's songs. I despair over the lack of real women as role models, it's my cause of the moment . Rock and roll and blues have a way of playing on the cliche of the evil women who'll break your heart. I was thinking about my three daughters and wanted some heroes for them to think about. A person like Clara Barton did real things, and when you have the truth and it reads like fiction, it blows you away. I had several songs about real women I wanted to include, but this one got to everybody -- the audiences were responding instantly. It was taking off on its own. It's dramatic, it involves war and the American Red Cross, which we all can relate to, and this one woman who created it. It's a very white Appalachian epic ballad. That's my roots, the folk hootenanny stuff. So I was happy to get this song out. I love singing it."

"Blues for Michael is just a blues. I wanted to write the simplest, easiest song -- when you're young, you want to write the most difficult forms because you want to prove you can do it. But sometimes doing the simple is really hard. This one goes back to Country Joe and the Fish stuff, the really slow simple stuff we did. The chords are simple, the lyrics are simple, it means exactly what it says And I hoped Jerry [Garcia] would play this song with me because we both knew Michael Bloomfield, we both know how easy it is to disappear, to die. It's real sentimental -- Jerry Garcia and Country Joe, singing about Michael Bloomfield, a very famous blues musician with a drug problem who died under mysterious circumstances about ten years ago. Sometimes a song has to be really personal, about your real life. This song is about me and how I feel about the fact that this friend of mine is gone."

Hey, hey, Michael won't you play some blues for me
to hear you play would be so heavenly