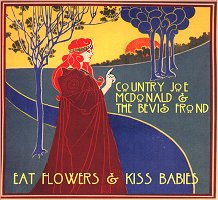 When the Bevis Frond met Country Joe McDonald in San Francisco in 1998 it was an auspicious occasion. Country Joe had been one of their most revered musical heroes of the 60s, so when Joe asked them to join him on stage at London's prestigious Queen Elizabeth Hall they didn't have to be asked twice. The ensuing gig was so successful, they did it all again a few months later at His Majesty's Theatre, Aberdeen. The resulting album is now available on heavy grade vinyl, mastered at Abbey Road or a beautiful 6 page Digipak CD from Woronzow Records.

Read more about the Aberdeen concert and the Queen Elizabeth Hall concert.

Recorded live at the Queen Elizabeth Hall, London, and His Majesty's Theatre, Aberdeen, 1998.